The defendant in an Assault With a Deadly Weapon charge, stemming from a September 2012 late night encounter with a victim on a dark Penn Valley road, pleaded to a weapons possession charge in Superior Court Tuesday morning. Brice Peeler, who allegedly pulled a gun on a man who was just walking on the road near his home in Penn Valley, is already serving time in Sacramento County for crimes he committed just a week after the Nevada County incident.

However, Assistant DA Anna Ferguson, says that regardless of that sentencing, he needs to held accountable for the gun crime in Nevada County. 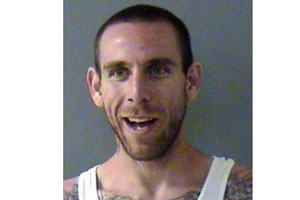 While in custody in Sacramento, Peeler had been delaying his court action in Nevada County as he waffled with selecting an attorney. He initially said he was hiring an attorney, then decided to go with a public defender, then dismissed the public defender and decided to represent himself. Peeler eventually negotiated a plea for a gun possession charge instead of the original assault with a deadly weapon charge. Ferguson estimates the difference in sentence between the two charges to be about 4 months less than if he had been convicted of the Assault with a deadly weapon.