Penn Valley Man Arrested on Vehicle Theft and other Charges

Grass Valley Police and Sheriff’s Deputies were both in pursuit of a suspect Sunday afternoon after learning through Lojack that the Pickup he was driving had been stolen out of the Lake Englebright area.

Lt. Gammelgard says one of Grass Valley’s unmarked detective units then located the stolen vehicle off of Oak and Squirrel Creek Road.

Ortiz then made a U turn and struck the detective vehicle head on.

Captain Pettit says Jason Ortiz was booked into county jail on two counts of assault with a deadly weapon on a peace officer, reckless evasion of a peace officer, vehicle theft, possessing drug paraphernalia,and violating post-release community supervision. Pettit says Ortiz has had numerous run in’s with the sheriff’s department in the past.

Ortiz is being held without bail. 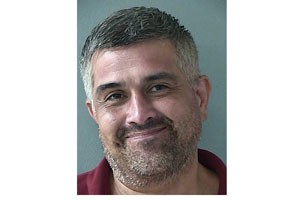