An annual fundraiser for the Domestic Violence and Sexual Assault Coalition raised a record amount for the non-profit focused on helping abuse victims in Nevada County. On Saturday sponsors raised $5000 dollars an additional  $275 has been donated since the conclusion of the event.  The final grand total is $5,275.00 which is the most the Penny Pitch has ever raised for a non-profit org. The first Penny Pitch in 2008 had two Penny Pitch Sponsors … this year there were seventeen!!
The Nevada County Broadcasters thank all of the great sponsors and volunteers that made the 2013 Penny Pitch a huge success! 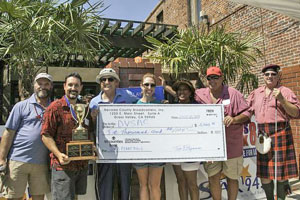