People And Their Pets

I don’t need to tell you how smart your pet is….because I know just how smart my pets are!  Our pets become such an intrigal part of our lives that they and we start to share many things.  Including looks.

We’ve all seen people that look like their pets.  From facial expressions to hair style.  Mostly we notice it with dogs & cats because those are the animals that we see in public most often with their owners.

What about birds?  Once upon a time, cell phones and their cameras became commmon place, I drove up behind a fellow with a Cockatoo (not the small grey Cocatiel) on his shoulder.  Anyone who ever watched “Baretta” in the 70’s knows how striking this large white bird can be!   So as I approached the stop light where this proud Cockatoo owner was waiting to cross the street I wondered if he looked like his bird.  HE DID!

I have long lamented the fact I didn’t have a camera with me that day.  Until now.  Not the same guy, but close enough to be his twin! 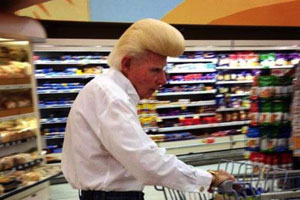