A  woman charged with identity theft, embezzlement and  practicing law without a license in Nevada County pled no contest to three felony counts of grand theft today in the Nevada City branch of the local Superior Court.   According to Assistant Nevada County District Attorney Anna Ferguson, 49 year old Sarah O’Neal operated “law” offices in downtown Nevada City and in Colfax . one of the offices , ironically was across the street from the District Attorney’ 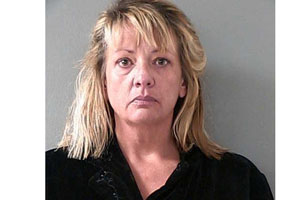 s office.   A citizen complaint in April 2012 prompted District Attorney Investigators  to examine O’Neal’s  State Bar status.  It was determined that she never graduated from law school and was practicing under the assumed identities of two lawyers with similar names that had either retired or move out of state.

O’Neal plead out in court today  (Monday 3/25) to three counts of felony grand theft,  with the remaining victims being reserved for restitution. While O’Neal handled several cases, only 8 victims have come forward seeking restitution for the attorney fees they paid to O’Neal.  Other victims may not have come forward because they were pleased with the outcome of their particular cases, though Ferguson says the legality of those outcomes is still in Question.
Click here to listen to Anna Ferguson

Investigators found  divorces, property disputes and adoptions among other cases that were officiated  by O’Neil when she was not licensed to practice law. Case Records go back to January of 2010. The Assistant District Attorney advises anyone hiring a person believed to be licensed in California to check references.*
Click here to listen to Anna Ferguson

Assistant DA Anna Ferguson expressed concern about O’Neal making full restitution.  She says “O’Neal’s false practice of law hurt many people.  While it is encouraging that O’Neal finally accepted responsibility for her actions, the People remain concerned for the victims involved and hope to secure full restitution on their behalf.”

A restitution hearing in the case is set for May 28th and  a sentencing hearing for Sarah O’Neal is set for  June 14th.  O’Neal is facing up to 4 years 4 months local prison.

This woman cost me thousands of dollars and then I lost my home to foreclosure! I would like to her to pay me back all of the money she took from me!

My client and I were the ones who discovered that Ms. Oneal was a fake lawyer and we were the ones that turned her in. It amazed me that she was able to get away from it as long as she did. My heart goes out to those other people who were defrauded. Ms. Oneal certainly didn't do my client any favors.