Union newspaper photographer John Hart has been honored by the Nevada County Board of Supervisors.The board issued a Certificate of Recognition on his retirement after 51 years of service. John began his newspaper career as a young boy delivering the Union to people along his paper route. He worked in the printing plant, and as he learned on the job how to develop film in the dark room, he also developed an interest in news photography and became the paper’s full time staff photographer in 1970. Supervisor Dan Miller read the certificate…

The entire management team of the Union Newspaper was in the audience to watch John Hart receive his award. The entire text of the proclamation is below. Photo is from the Union.

The Nevada County Board of Supervisors takes great pleasure in recognizing John Hart, Grass Valley Union photographer, on his retirement. A Grass Valley native, John began his newspaper career at a young age delivering The Union to people along his paper route. After graduating from Nevada Union High School in 1964, John began working full time at the Union’s Mill Street office and printing plant doing a variety of jobs from janitorial to operating linotype machines and preparing papers for delivery. As he learned on the job how to develop film in the dark room, he also developed an interest in news photography; which earned him the opportunity to become the paper’s full-time staff photographer in 1970. Over his 51-year career, he has witnessed and captured Nevada County’s most historic events on film. He lived with the police scanner on in the background and was usually one of the first on the scene of a news event. In 2014, Assemblyman Brian Dahle presented John with a resolution from the Assembly and State Senate for his 50 years of service to the community. That year, he also took second place awards from the California Newspaper Publishers Association for a Best News Photo and from the National Newspaper Association for Best Feature Photo; and along with The Union received the Nevada County Historical Society’s Citizen of the Year Award. John also volunteers with the Lions Club, is a member of the Nevada County Amateur Radio Club and the Nevada County Historical Society, and is active with his church. The Nevada County Board of Supervisors congratulates John Hart on his retirement after 51 years of service, and wishes him a long, healthy and rewarding retirement. 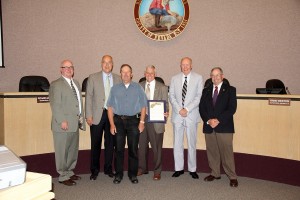