Placer County sheriff’s detectives catch another online predator… and they didn’t have to go far to arrest and book their latest suspect.
Public Information Officer Dena Erwin tells KNCO that Tuesday afternoon the suspect, Daniel Eugene Kirschner, 28, of Auburn agreed to meet for a sexual rendezvous, literally at the Placer County Jail* 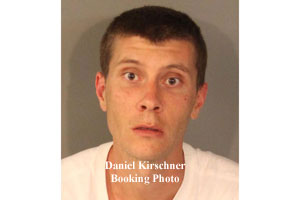 As soon as he arrived, detectives confronted him, arrested him and walked him into the jail.

Kirshner became the fourth suspect since February who has been arrested after placing an online ad that was answered by a Placer County sheriff’s detective responding to ads as a 13-year-old girl. In Kirschner’s case, he placed an ad seeking a girlfriend on a popular website. He did not stop corresponding when the “girl” told him she was 13 and emailed with the detective for one week.
Erwin says this is another sign that parents need to know what their children are doing online.

Kirshner was booked on charges of communicating with a minor for purposes of committing a sexual act and attempted lewd and lascivious acts with a child under the age of 14. His bail was set at $100,000 and he bailed out at 1:30 Wednesday morning.