With the demise of the old patrol car standard, the Ford Crown Victoria, the Placer County Sheriff’s Office has started to phase in a new vehicle, the Chevy Tahoe two-wheel drive SUV.
The Tahoe’s superior handling and large cargo area were among the reasons sheriff’s officials selected the Tahoe when Ford announced it would no longer manufacture the Crown Victoria. Deputies have had a chance to drive the Tahoe’s on a test track and their reactions were overwhelmingly positive.
The Sheriff’s Office evaluated the Chevy Tahoe, as well as available Ford and Chrysler products, and chose the Tahoe for the price, larger cargo area and its suitability for Placer County’s varied terrain.
The Sheriff’s Office was able to purchase the vehicles at a lower price than they had been paying in the past. The Tahoe’s were purchased for $26,209, the Ford’s for $28,348.
As well as offering a larger body style with more cargo space and an additional 70 horsepower, the Tahoe also has a slight edge over the Ford when it comes to fuel economy.
Phasing the Chevy Tahoe into the fleet to replace both the Crown Victoria’s and the Expedition’s will standardize the office’s entire fleet. The patrol vehicles and equipment will be the same from Tahoe to South Placer.
The new patrol SUV’s also sport a new striping and lettering package. The design was chosen for the sleek yet powerful presence of the word “SHERIFF” on the doors. The 3M reflective green stripe and reflective gold lettering stand out from hundreds of yards away on the street. 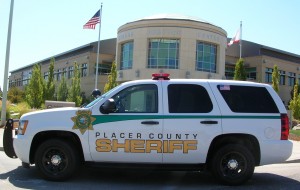 too bad there isnt a "real time 4wd", as it would be economical, and also be able to go into 4wd upon demand. Nice choice, especially with fuel economy in mind. Law enforcement uses a LOT of gas!