For the third time this week Grass Valley Police visited and arrested a number of suspects for various charges. Sgt Steve Johnson says that officers responded to the report of a vehicle that had been repeatedly speeding up and down the street Thursday afternoon. Upon arrival witnesses pointed out that the people in the car had run into a house that police had visited many times in recent weeks. The residents of the house were on searchable probation.
Click here to listen to Sgt. Steve Johnson 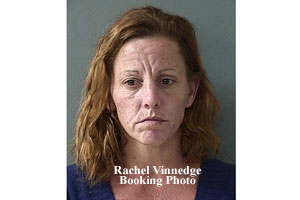 Then around 1:00 AM Friday morning, officers were dispatched to an apartment complex close to the Buena Vista house. While at the complex they saw 39 year old Rachel Vinnedge. She had just left the Buena Vista address and was cutting through the parking lot. Because she had been arrested at the Buena Vista house on Tuesday, officer stopped and searched her belongings.
Click here to listen to Sgt. Steve Johnson

In total there have been 13 arrests at the Buena Vista address. The house has been foreclosed by the mortgage company so Sgt. Johnson says that the department has been working with neighbors and multiple agencies to rid the property of the criminal element.
Click here to listen to Sgt. Steve Johnson

Until that date arrives, police will be making daily stops at the address to continue arresting suspects in violation of the law.

It is useless for me to even say anything.
Once hooked they have to stay hooked. The good folks in GV pay the price.