A male subject who was very polite to sheriff’s deputies still ended up going to jail on drug related charges. Thursday morning around 11:30 deputies served a a search warrant at a residence in Rough and Ready. Upon arrival deputies located a number of people inside and all were detained. At that point one individual, Johnathon Brejcha, asked if he could speak with an officer in private.
Click here to listen to Sheriff Keith Royal

Officers then placed Brejcha under arrest and as they were preparing to transport him to the jail, he asked if he could take his backpack with him.
Click here to listen to Sheriff Keith Royal 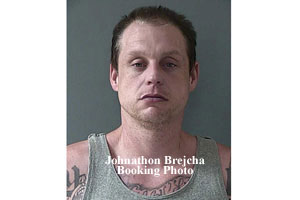 While deputies were running a records check on Mr Brejcha it was discovered he also had a no bail warrant out of Sacramento County. The suspect was transported to the Wayne Brown Correctional Facility.