A burglary suspect who was the subject of a manhunt in Grass Valley Tuesday is now in custody for another crime.
Early Thursday morning, at 3:11 a.m.  Grass Valley Police responded to a burglary alarm at the Hills Flat Lumber Yard off of Railroad Avenue.  The inside and outside lights were dark,  where normally they are on  which made officer suspicious.  Sgt. Steve Johnson says at that time a Nevada City Police Officer had arrived to assist and the officers located a door that was propped open on the east side of the building.

Nevada County Sheriff’s Deputies had also responded to assist, and from his vantage point above the Fun Park the officer was able to guide them to  the two suspects on his radio. The suspects, seeing the deputies approaching both fled on foot. One of the suspects was apprehended and was identified as 25 year old Allan Pollock who had been pursued by police since Tuesday when he had stolen cash from the Empire Mine and eluded officers in a search in the Bennett Street area.  Officers in Hills Flat Lumber determined Pollock and his accomplice had cut power to the building to kill the lights, but they were able to  review  surveillance video.  Sgt. Johnson says they  determined that Pollock was one of the two suspects that had been inside the Hills Flat Building. 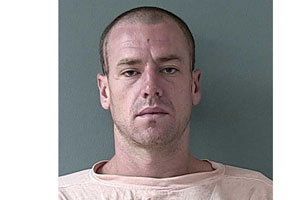 Pollock was booked on charges of burglary and parole violation.  He is also a  suspect in numerous other theft cases  in Grass Valley and detectives are currently working to see which thefts he might be linked to.  The second suspect in the Hills Flat Lumber break-in  is still at large.

I hope that our local police will not let him out of jail.
He was in custody in Placer Co and they let him out even though the Rocklin Police dept had arrested him on July 18 for being in possession of stolen property, taking a vehicle without the owner's permission, and being a felon wanted for parole violation in another jurisdiction. He spent 5 months in the Wayne Brown jail from Jan to June.
He needs to be incarcerated for a long time.