Postcards Delivered to Save Yuba Salmon

Congressman John Garamendi is indicating his support for restoring fish habitat to the South Yuba River. Garamendi’s 3rd Congressional District includes portions of the Yuba River and Englebright Dam,  and the Congressman says he has been working to try to find a solution to the lawsuit brought by SYRCL, the South Yuba River Citizens League, and the resulting biological opinion from the National Marine Fisheries Service that created more problems.
click to hear John Garamendi 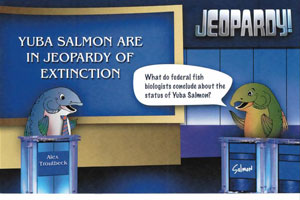 SYRCL  hand delivered 2,000 postcards to Congressman Garamendi asking his help in resorting habitat for endangered salmon and steelhead in the South Yuba River.  The signed postcards were collected during this year’s Wild and Scenic Film Festival and depict cartoon salmon and steelhead playing the famous TV game show, Jeopardy, to illustrate that these fish are in “jeopardy” of extinction.  Caleb Dardick   Executive Director of SYRCL says even little steps will help.

Dardick says Daguerre Point Dam  has fish ladders that were installed in the 1960’s and could be more effective with refurbishing, buthe says on the other side of  Englebright Dam is a 268 foot drop.  SYRCL says The Army Corps of Engineers  should be dumping gravel below Englebright Dam every year as one simple measure they could take to improve spawning grounds for salmon and help grow their population.