A lot of activity in the air and on the ground on Old Auburn road last night as law enforcement was tracking down a suspect..Debbie Ghirenghdllie  who lives on Auburn Rd. says the series of events started with a vehicle crash into a power pole.

CHP Officer Marc Morrison says the vehicle that hit the power poll fled the scene, and is still unknown at this time, but the transformer sparked a small grass fire and power was knocked out. Then as firefighters were on scene with the blaze and the CHP and Grass Valley Police were conducting traffic control around the downed power lines, another vehicle approached.

The suspect later identified as 33-year-old Justin Michael Greco then backed his car into the front end of a Sheriff’s patrol car.

Then Greco still moving forward almost ran over a firefighter.
click to listen to Marc Morrison

The firefighter suffered an ankle injury jumping out of the way of the out of control vehicle.
Greco then bailed out of the car and was hiding in the field for almost an hour before he was apprehended . The CHP Helicopter flying overhead used infrared imagery to eventually located him. Greco was booked into the county jail on charges of driving under the influence, possession of methamphetamine, resisting or obstructing an officer and assault with a deadly weapon when his vehicle went out of control. 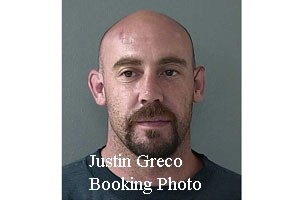 I'm not trying to make light of what Justin did at all as I known this man for many years he grow up with me oldest son TRAVIS Lewis.I know the pain he is going through after the death of my son I felt as if my life was over .the anger in my heart over the way my son died .yes my son battled a drug addiction for some time .and on that night he died he was giving a hot shot and ever one that was there just left after robbing my son and let him die this kinda pain dosent go a way .Justin and my son were very close and then all most to the date too years later Justin baby passed a way his little girl is gone and Justin just doesn't know how to deal with this do any of us that losses a child ? Some may give up on there own life .some may go after any one thinking the pain will go away .some will try to take there own life .at this point in my life I have had to give my pain and sadness to God but it took me 3 years to get were I'm today .I'm only writing this because Justin is a good person and has too more children to love as I have 3 more children and 4 grandchildren one I'm raising .there are some that just can't find a way to get help they become reckless with there own life's to the point that Justin has become out of pain from the death of his baby girl .I just pray for justice and his other children and there mommy .there is no amount of money to make any of this easier for justice he needs God at this time in his life .And I would like to say sorry to the firefight that got heart by all this .I'm paying that Justin can get some help with some counseling be for he hurts his self or anyone .I love this young man as my own son .