Prowler Claims He Was Neighborhood Watch

A man dressed in black wearing a ski mask in a tree outside a young girl’s bedroom claims he was part of the Neighborhood Watch program. According to Sheriff Keith Royal, deputies responding to a call of a prowler at a Sweetland Road address came upon a man with an axe handle standing in the driveway- but he was the man of the house.
Click here to listen to Sheriff Keith Royal

The deputy then walked around the side of the house and illuminated the tree and saw a man dressed in black wearing a ski mask. The deputy told the man to come down out of the tree and comply or he would be tazed.
Click here to listen to Sheriff Keith Royal 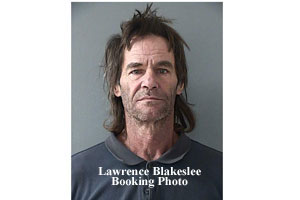 The deputy instructed the man, identified as Lawrence Blakeslee,  to get down on his knees so he could be handcuffed.
Click here to listen to Sheriff Keith Royal

Blakeslee was handcuffed and transported to Sierra Nevada Memorial Hospital to have the tazer probes removed from his body. Blakeslee was charged with stalking, willfully resisting arrest, and prowling on private property and booked into the Wayne Brown Correctional Facility.