Members of the public packed a Nevada County courtroom to show support for a popular doctor of alternative medicine. Harvey Bigelsen, a former trauma surgeon, and doctor of alternative medicine is being charged with practicing medicine without a certification, misrepresenting himself as a doctor, and manufacturing or altering medications. All charges are misdemeanors. 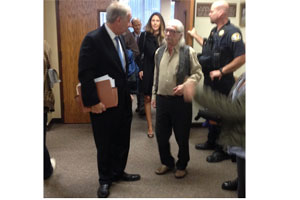 The public that have been treated by Bigelsen or know people that have been successfully treated by him showed up to provide moral support to Bigelsen at a hearing to suppress evidence against him. Reinette Senum has been a vocal supporter and leader of social media campaigns to support the work that Bigelsen has done in Nevada City.

Senum is concerned that alternative medicines are being eliminated as viable options for those seeking medical treatment.

Judge Candace Heidelberger listened to arguments for and against a motion to suppress evidence and will rule on the motion no later than November 25th The judge needs additional time to review cases referred to by Bigelsen’s attorney Mark Garegos before issuing her ruling.