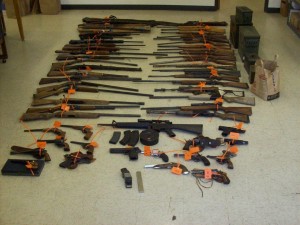 Nevada County narcotics officers, acting on some information given to them, served a search warrant on a North San Juan residence Wednesday. Sheriff Keith Royal says the officers went to the 21 thousand block of Purdon Road where 56-year-old Ray Jess Ashcraft was living.

Once inside, officers found an arsenal of weapons and several pounds of marijuana.
click to hear Sheriff Royal

Officers also found 5 to 10 pounds of cola and 30 pounds of shake.  Ashcraft was taken into custody and booked for posession of an assault weapon, posession of marijuana for sale, possession of stollen property, committing a felony while armed and being under the influence of a controlled substance. His bail was set at $12,000.

While at the residence, officers also made contact with 56-year-old Donna Lee Webb. She was booked for being under the infuence of a controlled substance, as was 59-year-old Ed Swanson.

Another man, who came to the residence during the incident, a 58-year-old  James Ronald Glasson, was arrested for posession of meth and transportation of a controlled substance for sale. His bail was set at $30,000.