Family and friends of Richard “Doc” Halstead, a Penn Valley community activist who passed away unexpectedly in December, will gather for a memorial celebration in Penn Valley on Saturday, January 11th from 4:00 to 8:00 p.m.  Halstead’s longime friend Bob Winters  says the event which is  a Pot Luck Dinner planned by the Penn Valley Community Rodeo Association will take place in the Old Penn Valley Firehouse at the intersection of  Penn Valley Drive and Spenceville Road in Penn Valley.
click here to listen to Bob Winters

Winters says  “Doc” got his nickname while serving in the Navy in Vietnam.

Halstead was born in Nevada City where his father owned a pharmacy.  “Doc” was widely known to his friends throughout Nevada County as a musician, realtor, horseman, and family man. He was instrumental in establishing the PVCRA where he served as President for five years. 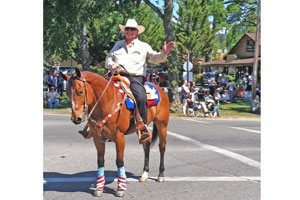