A leading figure in the downtown Grass Valley community, John Kane, Owner of Kane’s Restaurant , has died from complications from surgery.    KNCO Account Executive Joe Hevia,   says Kane, who was 59, had gone to southern California for   surgery and  his wife Maria Ramos, owner of Maria’s Restaurant in Grass Valley, was by his side.  John Kane has been a close, personal friend to many members of the KNCO family and the community at large.     Kane was a 4th generation San Franciscan  who  opened Kane’s Restaurant  in Grass Valley in 2006.   He wanted it to be exhibition-style,  with an open kitchen where guests  could watch the cooks; just like  Original Joe’s on Taylor Street  in San Francisco which  Kane  frequented  since he was   9 years old.  Later in life he found himself working  there. 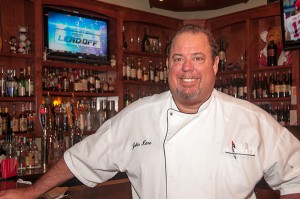 John moved on in his culinary career as Executive Chef for corporate hotels, personal chef to many celebrities such as Bill Cosby, Sammy Davis Jr., Jay Leno, and many more. He was also chef of the San Francisco Giants [2003-2007] and President of the Chefs Association of the Pacific Coast.     While Corporate Chef of US Food Co., he met his life and business partner, Maria Ramos.   John Kane  most recently hosted the 6th Annual Penny Pitch at his newly remodeled Kane’s Restaurant, which resulted in over $5,000 in donations to the Domestic Violence and Sexual Assault Coalition.

Kane’s Manager Amy Brown says the family has asked staff to keep the restaurant open during this difficult time, as John would have wanted.

He will be missed. He brought an energy to downtown we haven't seen in our 21 years of living here. We enjoyed spending leisurely Saturday afternoons having lunch and always enjoyed the staff.

Our sympathies to Maria, and the families.