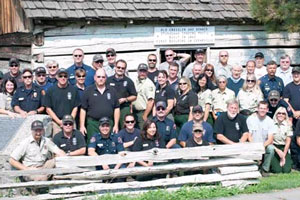 Nor Cal Team 2,  the tactical incident management  team that orchestrates fire fighting and other Emergency Response activity for the Federal Government  across the US.   Fike most recently has been leading efforts to suppress the Dance Fire burning in Humboldt County near the town of Orleans.  When we caught up with him yesterday he said the Dance Fire is just about contained, but another  fire just got going nearby on the Salmon river. 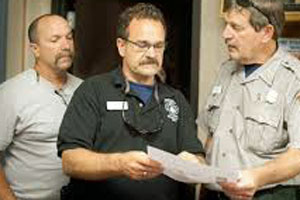 click to hear Tim Fike
That’s when incident commanders call in the Hot Shots to get into those hard to reach places. It turns out Fike’s 26 year old son, Cody,  is a 6 year member of the Truckee Hot Shots,  one of the  teams   sent in to fight the Butler Fire. Fike says this is only the second time  that he and his son have worked the same fire.   click to hear Tim Fike

There are now three generations of fire fighting Fikes, as Cody follows the  tradition of his father and his grandfather who also worked fighting fires for the US forest service.