The Rincon Del Rio senior retirement project  won  approval from the Nevada County Board of Supervisors Tuesday, which included making several amendments and changes to the county Zoning and General Plan.   Changes were necessary to accommodate the Continuing Care Retirement Community or CCRC design model.  Board Chair Hank Weston says “this is something different and new, and change is not always bad.”
Rincon Del Rio which has been 4 years in the planning  encompasses  215 acres near the Bear River with 170 acres of that left as open space   The 345 unit project would be built in phases, and the  resident count would be capped at 400.  The project is anticipated to generate $1.7 million dollars annually for Nevada County and provide jobs which Donna Dekker testified at public hearing is needed in the County.
click to hear Donna Dekker 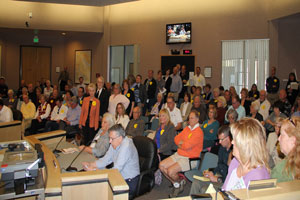 Financial planner Mary Owens says  surveys she has done on why people leave the county shows a CCRC is needed.
click to hear Mary Owens

Supervisor Richard Anderson representing Eastern Nevada County was the only dissenting vote, and says he  worries approval of Rincon Del Rio opens the door for similar projects to be built outside Truckee.
click to hear Richard Anderson

A staff report indicates there are 24 areas in the county that meet the proposed acreage and land use designation criteria for CCRC’s.   But planners say all future   development projects would face design analysis and Environmental Review similar to what Young Enterprises, the Rincon Del Rio Developers have provided.

Rincon Del Rio would be built around a village setting promoting interaction between senior residents.
Planning Department staff said checks and balances will prevent Rincon Del Rio  from becoming another DarkHorse. The project will be hooked up to the Lake of the Pines Waste-water Treatment plant  and supplied treated water by NID. In  response to citizen concerns on open space, conditions added to the project would stamp the 170 acres of open space on the county map to ensure it would not be developed in the future.  Another major concern from residents in the neighborhood  was the fire gate to be placed on the emergency access road.  Supervisor Hank Weston directed  Higgins Fire District Chief Jerry Good to work with them.
click to hear Hank Weston

The Development Plan was also amended to allow for a different type of fire gate on an access road as requested by the neighbors.  Keoni Allen, Sierra Foothills Construction,  is the builder on the project and hopes to break ground by this summer.