The “Robbers Fire” that broke out yesterday afternoon between Foresthill and Colfax in Placer county has   grown to 317 acres in size and is 20 percent contained as of 10 a.m. Thursday morning.    Cal Fire Information Officer Daniel Berlant says  the number of firefighters assigned to the Robbers Fire has been doubled to just over 500.
click to hear Daniel Berlant

No structures have been lost but Placer County Sheriff’s have evacuated about 200 people in the vicinity of the fire and say that 50 structures are threatened. The evacuations are for residents’ protection and to facilitate access by the heavy equipment brought in to fight the fire.
Evacuation centers have been set up at the Veterans Memorial Hall’s in Foresthill and Colfax.   Berlant says animals are being sheltered at the Placer County Animal Shelter at the Dewitt Center in Auburn. Resources on the fire today include 6 air tankers and 5 helicopters, 35 Fire Engines, 4 Bulldozers and 6 Water Tenders.

Berlant says  those aircraft will be vital in helping to slow down the fire which is burning in a very remote area with difficult access for ground resources.

The cause of the fire is still under investigation.
Peardale/Chicago Park Fire, Nevada County Consolidated, Higgins Fire and Nevada City Fire are among agencies assisting in fighting the fire.

Robbers Fire as seen from Cape Horn on July 11 around 4pm.Credit : YubaNet 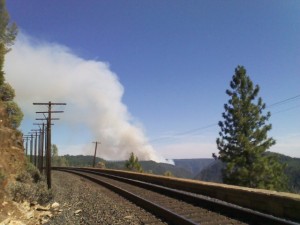