Last year’s visit by local Rotarian’s to the jungles of Papua New Guinea will be the subject of a video presentation and panel discussion Tuesday evening April 17, at the Nevada Theatre, 401 Broad St. in Nevada City. Members of 49er Rotary and others traveled to the Southwest Pacific nation, one of the least explored countries on earth, last October to conduct dental, building and educational exchanges at two schools founded by the late longtime Grass Valley resident Fred Hargesheimer. Rotarian Mike Ferguson says Hargesheimer was a reconnaissance pilot flying a P-38 and was shot down by a Japanese fighter and survived on his own with only two chocolate bars and what he could scrounge, until he came across some natives who fed him and sheltered him from the Japanese.
click to listen to Mike Ferguson 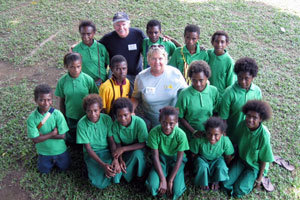 Over the years Hargesheimer returned to New Guinea many times where he built schools and economic opportunity for the people who saved his life. His work is chronicled in his book, The School That Fell From the Sky: A WW ll Pilot’s South Pacific Tale of Grit and Gratitude, which has been described as one of the best stories of the Pacific War. The community program titled, Rotary Returns to the School That fell from the Sky will provide insights into Papua new Guinea, its people and Hargesheimer’s work. $5 donation 7-9pm.