Rotary Workday at the Fairgrounds

On Saturday, the Nevada County Fairgrounds was spruced up with the help of the five local Rotary Clubs, local contractors, and many volunteers. Over 100 volunteers helped with nine major projects. Nevada County Fair CEO Sandy Woods says   they took on some tough projects to make the fairgrounds shine.

Jim Moule of Moule Paint and Glass donated the paint and supplies.   At the Wine Pavilion the old worn wood deck was torn up and a new concrete patio has been poured. Orson Hansen and the Hanson Brothers donated concrete and Daminan Earley donate a crew.

The150 feet of cedar wood fencing around the Main Administration building  was stained, and in the Quaker Hill and Tall Pines area,   new roofs were put on  two open air buildings. With these improvements, Woods says  it may become a beautiful venue for weddings. Kevin Casey and Mark Casey, of Caseywood, donated materials.

There was a dilapidated billboard on the Highway 20 side of the fairgrounds which was taken down and a new sign was put up that  has the fairground logo and allows the fairgrounds to put up banners advertising events.  Ed Townsend of Grass Valley Signs donated his time and materials.

In the far side of the fairgrounds there was an underground amphitheater into which a child could fall  . This hazard was taken down, and the debris removed. Charlie Fabor and David Petty of C&D Construction provided the excavator and Steve Cameron of Waste Management provided dumpsters for the project.
Trees were planted and the grounds were raked of pine needles and pine cones.  The marigold planters were also weeded.Mark Flemming of BP Landscaping provided the trees.
click to hear Sandy Woods

The message on the  McCourtney Road main sign at the fairgrounds says “Thank You Rotary!” 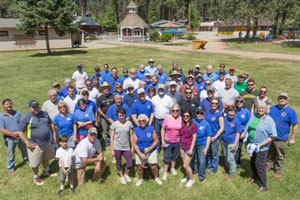