An application to reopen the historic San Juan Mine on the San Juan Ridge has been canceled by the Nevada County Planning Director.
The San Juan Mining Corporation (SMC) had applied to resume operation of the mine in February 2012. Over the next four years, SMC had failed to meet the county’s stringent requirements for testing the impacts of the mine on local wells.

While the Planning Department required SMC to collect a full year of water quality and quantity data, the mine operator abruptly halted monitoring after only six months. The San Juan Ridge Taxpayers Association was formed to oppose the mine and Board President, Sol Hansen says testing was needed because the last time the mine operated in the 1990’s it dewatered 12 domestic wells and contaminated others including Grizzly Hill School and the North Columbia Schoolhouse Cultural Center…

click to listen to Sol Henson
In a March 14th letter to SMC’s CEO Timothy Callaway, Nevada County Planning Department Planning Director, Brian Foss, informed the applicant, “The use permit and reclamation plan applications are now closed , and reopening the project would require a new application with associated fees.”
Hanson says they couldn’t be more pleased with the County’s decision.

Henson says at this point, Community Will, Science and reason kind of won out, but the community still needs to keep up their guard. They would like to see someone purchase the land and put it into a conservation easement. North San Juan Taxpayers Association will be looking to SYRCL and the Sierra Fund to help reach that goal. 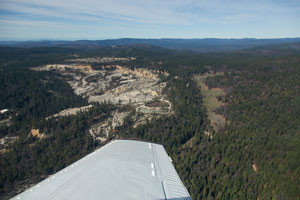 Overhead picture of San Juan Mine