Nevada County Sheriff Keith Royal conducted a promotional and swearing in Ceremony at the Rood Center this morning for 7 officers rising in the ranks and three new deputies.   Among the most historic of the group is the promotion of Lt Shannan Moon to Captain, making her the first female Captain in the history of the department.  She says she is honored to be in a command staff roll commanding a division. 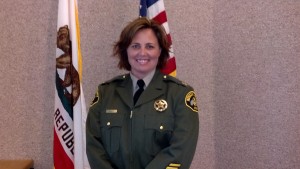 Captain Moon was raised in Nevada County and her father Jim Moon was also a public officer serving as a deputy sheriff and the Chief of Police in Nevada City.
Also promoted to Captain is Jeff Pettitt.  Bill Smithers and Paul Schmidt are promoted to Lieutenant.  Robert Jakobs and Sam Brown were sworn in as new Sergeants and Bill Bierwirth was sworn in as the new Correctional Sergeant.  Three new Deputies were also sworn in.  They are Russell Olson,  Ryan McCormack and Deputy Glenn Rigel.
.