Nevada County Sheriff’s Deputies went to a residence in the 19 thousand block of John Born Road yesterday (Thursday) on a probation check. Sheriff Keith Royal says when they arrived, seven individuals were there and they wound up arresting two.    Darryl Wayne Skelton was taken into custody on warrants for failure to appear on felony drug charges and evasion.     Another individual was arrested for failure to appear on some misdemeanor charges.  But, Sheriff Keith Royal says they uncovered some other suspicious activity.
Click here to listen to Sheriff Keith Royal 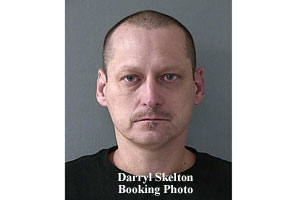 While deputies were out on John Born Road, yesterday they also served an abatement warrant for an out of compliance  marijuana garden and removed 220 mature marijuana plants.
Click here to listen to Sheriff Keith Royal

The property was out of compliance because there is no permanent residence on the property and because the number of plants exceeds what’s allowed under the county marijuana ordinance. The owner of the property resides out of the area.