A person suspected of shoplifting was  arrested for that and other charges on Saturday. Grass Valley Police officer Colin Nelson says a Brunswick Rd. business had called them to report a suspect taking items from the store without paying for them. During the response, officers were able to locate a couple of subjects matching the description of the suspect and one was identified as 29 year old Tabitha Gilbert. 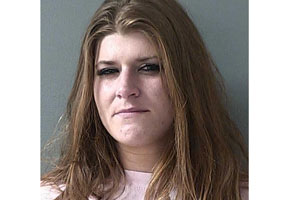