Showering Burglar Has a Snack Before Going to Jail

The man called to his son through the bathroom door and was surprised by the response.
Click here to listen to Sheriff Keith Royal 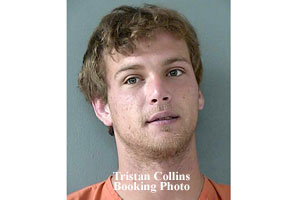 The man, later identified as Tristan Collins 23 from Yreka, then proceeded back into the bedroom and began trying on more clothes and eating some food he had gotten from the kitchen earlier.

At that point the Sheriff’s Office was called and deputies responded to the scene and asked Collins what he was doing. Collins responded that somebody was following him and he wanted to get away from them and also get some something to eat. He also wanted to take a shower. Collins explained that he didn’t know whose house it was, but the door was unlocked so he went inside.

Collins was taken into custody for burglary. Sheriff Royal says this is another opportunity to remind residents to lock the homes.