Friday afternoon around 1:30 pm a Nevada County Sheriff’s Deputy had pulled into the Golden Chain Motel off Highway 49 south of Nevada City. He stopped so he could safely retrieve his cell phone which had slid onto the floor of the cruiser.

Sheriff Keith Royal says after he retrieved the phone, the deputy noticed a vehicle had pulled in around him and was blocking the driveway.

After awakening him the Deputy determined the man was Jamie Sauceda age 37 of Grass Valley.

The deputy also determined that this was the last day of Sauceda’s probation and that he did not have valid insurance.”

The Sheriff says a search of Sauceda and his vehicle uncovered a syringe, electronic scales, methamphetamine and packaging material for methamphetamine.
He was also taken into custody for being in possession of police tear gas. and his probation was revoked.
— 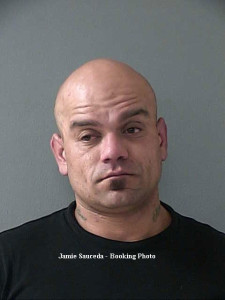