The Northern Sierra Air Quality Management District is issuing an air quality health advisory to notify the public of the potential for poor air quality conditions in Plumas, Sierra and especially Nevada County due to smoke from the American Fire in Placer County. The Fire is burning in steep terrain approximately 11 miles northeast of Foresthill, and has the potential to grow significantly. Smoke is primarily fine particulate matter, but also includes volatile compounds and nitrogen oxides, which form ozone through chemical reactions that are fueled by sunlight and warm temperatures. Therefore, ozone levels may also be elevated at times. 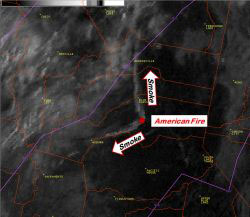 Here is a satellite image this morning centered on the ‪‎American Fire‬.

Interestingly two plumes of smoke are evident. One is blowing down the Sierra, with smoke being reported in Auburn.

The other is blowing northward, with smoke being reported in Nevada City, and evident over Blue Canyon and Downieville. 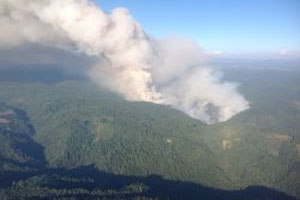 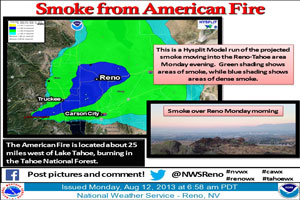 Woke up at 4:30 am from the smell of smoke. Appreciate this post on your website. Was hoping for something for current, but thank you for what you have.