Another self-proclaimed sovereign citizen causing issues with local law enforcement. Nevada County Sheriff Keith Royal tells KNCO that Thursday afternoon his office was contacted by a home inspector that was sent out to a supposedly unoccupied Douglas Road property and was surprised to find people inside.

Deputies respond to the address and try to identify if anyone is inside- looking in windows, calling out- and nobody comes to the door. However, Royal says there is a dog that tips off someone inside the house.

After a period of time a male, later identified as 50 year old Benjamin Ornelas, comes to the door and confronts officers stating it is his residence and ordering officers to leave. 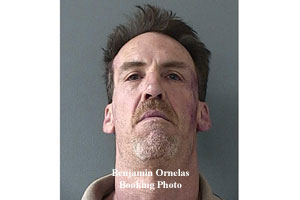 Deputies learn that Ornelas is on probation from Yuba County and it was discovered that Ornelas was self-proclaimed sovereign citizen and could be dangerous.

Once in custody deputies search the house and discover three more occupants. Royal says one was strictly a victim of circumstance.

Benjamin Ornelas was booked on a variety of charges including second degree burglary, ex-felon in possession of a firearm, resisting arrest, committing a felony while armed, and utility theft. Bail was was set at $200,000. 19 year old Conan Robertson and a 17 year old from Missouri were also taken into custody for burglary and resisting arrest.