Another incident regarding self-proclaimed sovereign citizens landed one man in jail and a number of citations for the other. Sheriff Keith Royal says the incident began when a deputy on patrol near Adam Avenue and Rough and Ready Highway spotted a vehicle that matched the description of one that may have been involved in a number of residential burglaries in the area.

The driver eventually identified as Logan Paul, 26, from Grass Valley and the passenger identified as Benjamin Ornales 50. Initially the two could not provide any identification. 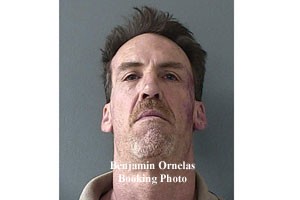 As a result, Benjamin Ornales was charged with possession of a dirk or dagger and booked into the Nevada County Jail. Logan Paul was cited and released at the scene.
Ironically Ornales had been arrested in August for squatting on a property and possession of marijuana claiming his sovereignty and that property laws did not apply to him.