Last Tuesday evening about 10 o’clock a Nevada county Sheriff’s Deputy made a vehicle stop on a driver that was speeding at the Sacramento Street exit of Hwy 49. 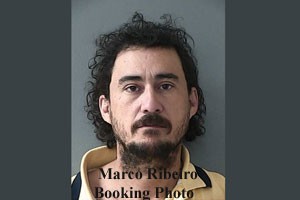 Sheriff’s Lt. Steve Tripp says A female passenger was in the vehicle with Ribeiro and she picked up the bottle but instead of giving it to the deputy she emptied the contents into Ribeiro’s hand. The deputy had an idea of one substance.

Lt. Tripp says Ribeiro attempted to conceal the baggies by dropping them onto the floorboard of the car to try to dispose of them.

The Deputy then checked the vehicle registration and discovered it was a rental car that was due back to the rental company on April 7th. Since the rental car company had not yet filed a stolen vehicle report the female passenger was allowed to  drive away with the car. Ribeiro told the deputy he was on his way to Ananda in North San Juan when he was initially pulled over for speeding.