A crime spree spanning from south county to Nevada City ended with the arrest of a suspect in Grass Valley. Grass Valley Police Sgt. Steve Johnson says at 9p.m. Wednesday evening Nevada City Police took a report of a Harley Davidson Motorcycle that had just been stolen.

Then, at 11:21p.m. a Grass Valley Police Officer was flagged down by a citizen on Mill Street saying he had just interrupted a man who was trying to steal his Harley Davidson motorcycle while it was parked in  front of the Gary’s Place Bar, and the suspect was last seen running from the area towards the Safeway parking lot. Officers began an area search and the suspect was spotted hiding under the stairs of the Library on Mill St.
click to listen to Sgt. Johnson 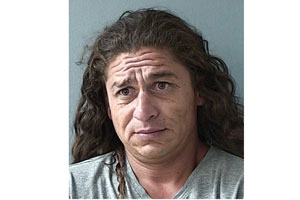 The suspect was identified as 41 year old Thomas Michael Morrison, and a check revealed that he was on active parole out of Modesto for several prior thefts. At that point Morrison was arrested and booked into county jail for the attempted theft of the motorcycle, violation of parole, and resisting and delaying an officer.  While officers were trying to determine if Morrison was responsible for the other two motorcycle thefts, they caught a break at 9a.m. this (Thursday) morning when a man living in an apartment at 300 Mill St. called to report suspicious activity.
click to listen to Sgt. Johnson
Officers were able to determine the motorcycles were the ones stolen from Nevada City and The Dew Drop Inn the previous night and they were returned to their rightful owners.