The Nevada County Sheriff’s Department has made an arrest, and as a result, recovered a bunch of stolen items. Sheriff Keith Royal says the victim who called 9-1-1 works in the Dark Horse area, and had an air compressor stolen. The thief apparently left a box behind that had a mailing label with a Torrey Pines Drive address on it… 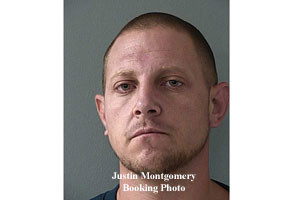 Deputies talked with the homeowners, and learned that 34 year-old Justin Montgomery stayed there. The homeowners showed deputies his room….

A ‘Be on the Lookout’ was issued, and Grass Valley Police ended up making a traffic stop, and detained him until deputies arrived. Royal says they found a glass pipe commonly used to smoke methamphetamine, a white powdery residue on the pipe, bolt cutters, pry bars, and two boxes of ammunition. And that’s not all…

Montgomery went to jail on a variety of charges totaling four felonies and four misdemeanors.