Stolen Jewelry to be Returned to Burglary Victims 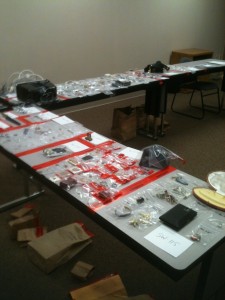 Investigators in Nevada county are trying to return suspected stolen jewelry taken by two men in burglaries that occurred in the last two months. Nevada County Sheriff’s Sgt. Dan Saunders says investigators have recovered hundreds of items taken by two men. A search warrant was served on the home of Gregory Pelletier and Brendan Moore and officers recovered a large quantity of jewelry and other items.

Saunders says the victim they have contacted will be allowed to look at the jewelry and try and identify it.

Saunders says the two went to homes and knocked on the door if the door was unlocked, they ransacked the home. If the door was locked they just kicked in the door. Saunders encourage neighbors to report suspicious activity and home owner to lock their doors and windows. The two men remain in the jail awaiting trial.