At first the subject gave police a wrong name and address but he was eventually identified as 23 year old Todd Austin.

Sgt. Ellis says the suspect kicked one of the officers in the thigh as they were trying to take him into custody and spitting on the officers as he was placed under arrest. 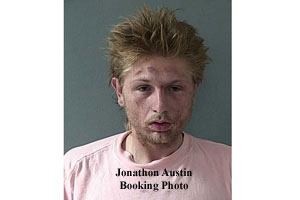 Austin was taken to the hospital for medical evaluation then booked into the Wayne Brown Correctional facility on a felony charge of obstructing an executive officer and resisting arrest.