A suspect being questioned following a traffic stop may be connected to several burglaries in Grass Valley.  Monday night a sheriff’s deputy witnessed a black Lexus hurriedly depart a mobile home park on Highway 49 near Little Valley Road. As the deputy positioned his car behind the Lexus, the driver accelerated to speeds in excess of 70 miles per hour. Sheriff Keith Royal says the driver also made several other reckless maneuvers.
Click here to listen to Sheriff Keith Royal 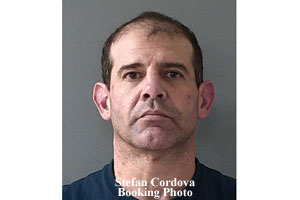 The deputy spotted a glass meth pipe on the floorboard while interviewing the driver who was driving without a license. The driver identified himself as Richard Cordova.
Cordova was taken into custody and while being booked into jail, his real identity was discovered.
Click here to listen to Sheriff Keith Royal

The sheriff says that additional items of interest were located in Cordova’s vehicle.
Click here to listen to Sheriff Keith Royal

Stefan Cordova was booked for possession of paraphernalia, the felony warrant, and presenting false identification to a peace officer. The Sheriff’s Office is working with Grass Valley Police regarding the discovery of Jared Cline’s backpack and associated jewelry.