A high speed chase on the San Juan Ridge ends with a suspect going to jail for a number of crimes. Nevada County Sheriff Keith Royal says that the sequence of events began when a deputy pulled in behind two vehicles that were driving on Tyler Foote Rd around 3:00 AM Sunday. While following the two vehicles, the deputy watched the car second in line pass the first car on a dangerous curve in the road and attempt to accelerate away.
The deputy waited to pass the lead vehicle and then pursued after the suspect vehicle.

Royal says the vehicle reached speeds in excess of 90 MPH but the driver could not keep the vehicle on the road. As he attempted to make a turn in an effort to avoid the officer, the car slid off the road and into a tree.*

At that point the deputy ordered Steffes out of the car and took him into custody for evading a peace officer.

A search of the vehicle turned up both cocaine and LSD. 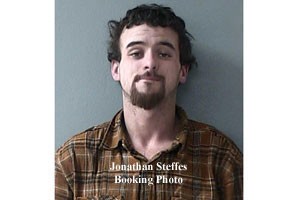 Sheriff Royal says the suspect, Jonathan Steffes, 23, had an interesting reason for trying to get away.

Click here to listen to Sheriff Keith Royal
Steffes was determined to driving on a suspended license and was out on bail for a previous crime.
He was booked into the Wayne Brown Correctional Facility for evading a peace officer, being under the influence of a controlled substance, possession of a controlled substance, committing a felony while on bail, and driving on a suspended license.