A suspect taken in to custody at the Grass Valley Library Wednesday afternoon had a lot more going against him than an overdue book. Grass Valley Police Sgt Jason Perry says that officers were originally called to the area of library because a suspect with an outstanding warrant was nearby. Upon arrival the officers located a group of three men outside the library and when asked who they were all three provided names came back from the system clean. However, one of the men, later identified as Christian Ponce,  began acting suspiciously. 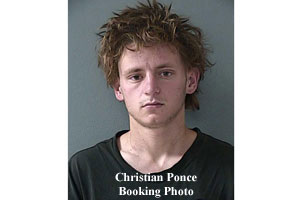 Suspicious of potential drug use, officers recontacted Ponce and did an evaluation on him and it was determined that he was likely under the influence of a controlled substance. Officers took Ponce into custody and he became belligerent and needed to be restrained in order to remove him from the library. While removing Ponce, he yelled a concerning statement.

Ponce was taken to Sierra Nevada Memorial Hospital to be medically and psychologically cleared and then booked into the Wayne Brown Correctional Facility for Carrying a loaded firearm in public, impersonating a real person when first contacted, possession of paraphernalia, being under the influence, and probation violations.

Thank You Law Enforcement. You are as good as it gets.