A suspect that was first arrested for shoplifting in early April and was rearrested the following day for burglary of a music store an attempting to resell items to a second-hand business. The suspect, Keeth Curtis,  was arrested for a third time on April 10th when he was trespassing in an apartment and locked himself in the bathroom. Sgt Clint Bates of the Grass Valley Police Department says officers ordered him out of the bathroom.
Click here to listen to Sgt Clint Bates 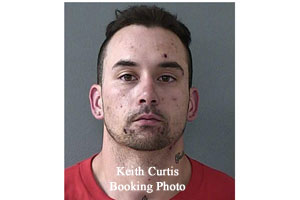 At that time Curtis was arrested for trespassing, obstructing a police officer and possession of drug related items.
Then on April 12th, Curtis was arrested two more times. The morning of the 12th the suspect was caught on video ransacking a locker room stealing cash and jewelry at a convalescent facility. Someone related to an employee saw the video.
Click here to listen to Sgt Clint Bates

Curtis was also in possession of more drug related items.  Later that same day officers investigating a reported shoplifting from the Rite Aid on Sutton Way recognized Curtis in the video and returned to the Wayne Brown Correctional facility and located items stolen from the Rite Aid in his back pack which was being held at the jail. Curtis is being held on 100,000 dollar bail for multiple burglaries and drug related charges while out on bail..

And this guy votes?