Suspect Arrested for Assault on Highway 174

A verbal argument escalated to an assault with a deadly weapon that eventually led to the arrest of a suspect in Grass Valley.
Thursday around 11:00 AM Nevada county Sheriff’s Office received a report of a potential stabbing on the 10-thousand block of Happy Dale Rd. Nevada County Sheriff Keith Royal says the caller was being threatened by the suspect.
Click here to listen to Sheriff Keith Royal 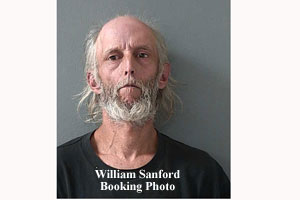 When the deputy arrived he noticed several knives on the ground, one with blood, so he quickly searched the area and located the victim who had a minor cut where the suspect had stabbed his hand.
The victim said the suspect, William Sanford 46, had been living on the property but had not met an agreement to clean-up portions of the property. When the victim asked Sanford to leave, the suspect became violent.
Click here to listen to Sheriff Keith Royal

The suspect then left the property on foot.
The deputy issued a “be on the lookout” for the suspect, and Grass Valley Police located Sanford walking on Highway 174. Sanford was detained by police then taken into custody by the Sheriff’s deputy. William Sanford was charged with assault with a deadly weapon and booked into the county jail.