Suspect Arrested on Burglary and Sex with Minor Charges

A man wanted in connection with a reported break-in and burglary of a Nevada City Restaurant has also been identified as a suspect wanted by Grass Valley Police for having a sexual relationship with a child under the age of 14. Last Friday Morning (Feb. 27) Nevada City Police got a call of a burglary at a cafe on Commercial Street. Officer Scott Goin says the owner reported vandalism and money taken.

click here to listen to Officer Scott Goin
Video Surveillance inside the cafe clearly showed the suspect and he was identified by Nevada City Police officers from prior contact as 23 year old Daniel Vandoren .

No one was found inside the vacant home but officers did find a backpack containing some identifiable items belonging to Vandoren. With Vandoren identified in connection with the cafe burglary and breaking into the vacant home,  a Be On the Lookout notice was issued for Vandoren.  Grass Valley Police located him  in the 300 block of Mill Street and he was taken into custody and booked by Nevada City Police. Meanwhile on January 30th of this year Grass Valley Police had taken a report from a female under the age of 14 that she had been in a relation with a male subject who was 23 years of age. Lt Alex Gammelgard says that subject was identified as Daniel VanDoren through the investigation and it was learned that at on at least one occasion Vandoren had engaged in sexual contact with the girl.

Van Doren is being held on 6 felony counts including Lewd and Lacivious acts with a child, Burglary and tresspassing, with a total bail of $60,000. He was booked into jail as a transient according to the Nevada City Police. 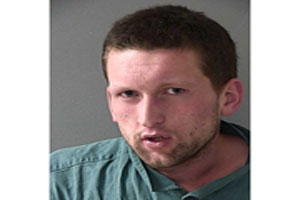