A suspect on searchable probation learned a painful lesson when he attempted to run from law enforcement Sunday morning.
Nevada County Sheriff’s deputies responded to a Taylor Crossing Road address because a vehicle was blocking an entrance to a property. Officers approached the vehicle and woke up the driver who had apparently fallen asleep behind the wheel. The deputy recognized the driver as a Wyatt Yoder age 27. When the deputy asked Yoder to get out of the vehicle he complied but gave the officer a false name and birthday. At that point the officer asked Yoder if he could search him. The officer located suspected methamphetamine and the officer told Yoder he was going to place him under arrest. Sheriff Keith Royal says Yoder decided he was going to run and while running trips and falls face first into the gravel.
CLick here to listen to Sheriff Keith Royal 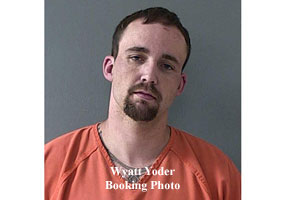 Yoder pulls into the area where he was originally parked and proceeds to get his vehicle into a position that he cannot go any further and gives up. As officers take him onto custody, Yoder begs for water to wash the pepper spray from his face and upper body as it is now causing great discomfort. The deputy pours about a gallon of water on to Yoder and the pepper spray begins to spread.
CLick here to listen to Sheriff Keith Royal

Yoder is taken into custody and transferred to the hospital for medical clearance for being under the influence of methamphetamine as well as treatment for the paper spray.
Yoder was booked for evading a peace officer, 2 counts of resisting arrest, possession of a controlled substance, using false id, and violation of post release supervision.