A suspect in a car with multiple vehicle code violations allowed sheriff deputies to search the car which ended up badly for the individual. Sheriff Captain Jeff Pettitt says that deputies detected the strong smell of marijuana as they were speaking with the suspect, Brandon Henslee. 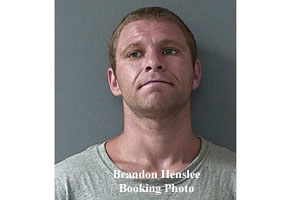 While searching the vehicle, Henslee did tell deputies that he forgot he had two bags of marijuana shake in the back seat. Officers continued the search and made several other discoveries.

The substance was consistent with a form of concentrated cannabis called Honey Oil.
Pettitt says Henslee was taken into custody for manufacturing a controlled substance and while being booked into the jail was also discovered to be on bail for a previous crime. Committing a felony while on bail was added to the charges.