Grass Valley Police responded to a report of someone selling methamphetamine in broad daylight out of a vehicle that was parked at 150 Glasson Way , near Sierra Nevada Memorial Hospital. Grass Valley Police Lt. Alex Gammelgard says the call came in Friday Afternoon around 2 pm.

Police contacted Alexander and determined that he was under the influence of a controlled substance and he was placed under arrest.

While the officers were talking to Lynn McCarthy, Alexander became agitated and started screaming and thrashing about in the back of the patrol car. 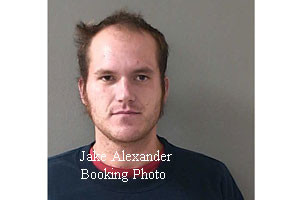