The man who caused an hour-long standoff with law enforcement outside a Grass Valley business Monday night has been identified as 18 year old Aaron Herbert….a local homeless person who is believed to have been couch surfing in the Grass Valley area. Police were called Monday evening to the 1,000 block of Sutton Way after Herbert was causing a disturbance in the store and would not leave. During a nearly hour long stand off, neighboring businesses were evacuated and a perimeter was established. Two customers inside the store were able to leave without being stopped by the suspect. Herbert was eventually taken into custody without incident and was taken to Sierra Nevada Memorial Hospital for a medical evaluation and was cleared Tuesday afternoon and was booked into county jail on charges of assault and threats of grave bodily harm to law enforcement, resisting arrest, petty theft, possession of stolen property, and trespassing in a commercial business. He was being held in lieu of $16,500 bail.
Grass Valley Police say they have had multiple contacts with Herbert in the past. 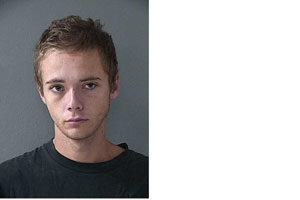