Suspect in Truckee Carjacking was in Grass Valley

An attempted carjacking in Truckee caught on surveillance video. According to a Truckee Police Department Press release, the suspect Nathan Jones, 29 was jumping on cars and breaking windows in the area of Bridge St. and Donner Pass Rd. 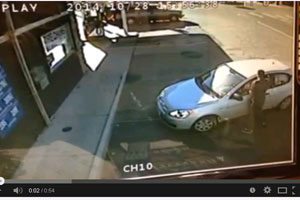 A Truckee police officer drove to the area and interrupted an attempted carjacking in progress, at the Beacon gas station. The officer observed an adult male suspect trying to pull a female victim out of her car by her neck. The officer engaged the suspect and physically removed him off of the victim and placed him into custody. Jones appeared to be under the influence of a controlled substance and continued to act out violently after he was taken into custody. 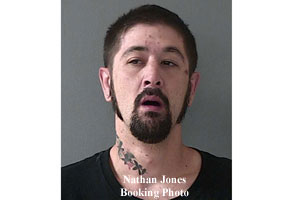 Prior to this attempted carjacking, Jones attempted to enter another vehicle at the gas station occupied by a female adult. Jones broke out the driver’s side window, before that victim was able to drive off.

The investigation revealed Jones was under the influence of a CNS stimulate. A search of Jones’ belongings revealed a one-pound heat sealed plastic bag of marijuana and a homemade weapon commonly known as a Sap.

Nathan Jones was recently arrested by Grass Valley Police for an outstanding warrant.

Jones’s antics were caught on video at the gas station. The video depicts Jones attempting to enter the first vehicle and after being unsuccessful, he moves toward the second attempt.
Click here to view the surveillance video

Jones was booked on multiple felony and misdemeanor charges, including 2 counts of attempted carjacking, felony battery, battery on a peace officer, resisting arrest, possession of an illegal weapon and possession of a pound of suspected marijuana.