A suspect wanted for an assault charge in Grass Valley was arrested by Nevada County Sheriff deputies following a short foot pursuit Saturday. According to GV Police LT. Alex Gammelgard, initially the suspect had committed an assault at the apartment complex which he resides. 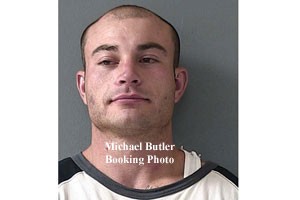 According to Nevada County Sheriff Lt. Bill Smethers, deputies received a tip that a Michael Butler was at a residence on North Ponderosa Way west of Grass Valley.
Before arriving at the North Ponderosa residence, officers spotted Butler in a vehicle and initiated a traffic stop. The vehicle pulled over and Butler jumped out of the passenger side and began to flee.

Butler was transported and booked at the Wayne Brown Correctional Facility for evading a peace officer, violation of parole, and the original assault with a deadly weapon charge.