Suspect With Gun Arrested in GV

A man with a gun illegally tucked in his waistband was taken into custody Monday evening. Grass Valley Police were first notified of the man being inside a downtown bar ordering a drink. While the customer was ordering, the gun was brought o the attention of the bartender and the drink was never served. The man left the bar and headed down the street. Police responded to the area but were unable to locate the subject. A short while later a second call came into dispatch.

Police made contact with Isaac Novander, 28, and took possession of the gun. The gun had been rendered inoperable and there was no clip installed. However Novander was arrested for carrying a concealed weapon without a permit.

In a separate incident, a woman ran when she got uncomfortable talking to a police officer.

A female suspect panicked and ran when a Grass Valley police officer stopped to talk with her. According to Grass valley Lieutenant Alex Gammelgard an officer recognized the female as 21 year old Karissa Ladd-Zankich and new she had warrants for her arrest. 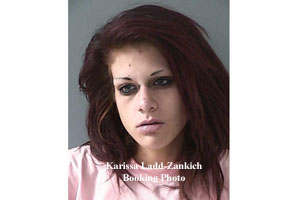 The officer was able to place the suspect in handcuffs.
A search of Ladd-Zankich’s purse located a syringe with a dark brown liquid laded into the cartridge. The substance tested positive for heroin.

At that point Karissa Ladd-Zankich was arrested for possession of narcotics and paraphernalia as well as 30,000 dollars worth of warrants from Yuba County.

I went to high school with this girl. She used to be so beautiful. This breaks my heart.

She has a kid...that's is heartbreaking for her daughter! Doesn't matter about her she's an idiot. But her daughter shouldn't have to grow up with a mother like that. What a shame!!

This could happen to anyone. Heroine is a huge problem in Nevada County. Karissa - you are so loved and still beautiful and ain't nobody giving up on you girlfriend. <3

I know her father very well. He never raised her to be this way. He along with others, have been praying for her to pull herself together for a few years now. You cannot help someone who doesn't want help. Getting caught is the best thing for her at this point. I pray she receives the help she really needs and finds herself on a successful path to recovery...

It's easy to be judgmental, but we shouldn't be. This is no time for name-calling. She needs help.

I attend campus life in grass valley, and the big theme that keeps surfacing is "Hate sin, but don't hate the sinner" so if you see this and you're disgusted, good! It's wrong, sad, terrible, painful, ect. But if you read this and pass judgment and call names... You are wrong! Seeing this so close to our home should infuriate us! To a state of productivity!!!! Not judgement... If this strikes a cord of hurt, anger, or disgust in your heart then you should do something!!! Our local highschools have drugs pumping through them, most our street bums are using achohal, drugs, or both, it's all around us!!! DO SOMETHING! Touch one persons life! Save one person from this future! Save one person from an OD! That one person... That one person is you growing up in a different home... Wouldn't you want someone to take a few hours from there life to help save yours?

Praying for her and her family. Alec funny you talked about campus life Karissa went on a campus life trip with me one time.